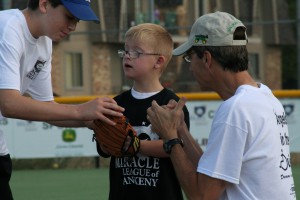 There are 275 Miracle League Organizations across the country including Puerto Rico, Canada, and Australia. The Miracle League is proud to serve over 200,000 children and young adults with disabilities.

The Miracle League Field is a baseball diamond consisting of a rubberized latex-free surface that is free of obstacles and has painted baselines and dugouts at field level. The field is designed specifically for wheelchairs, walkers, and other mobility devices needed to assist participating youth.

"David has Cerebral Palsy. He has no head or trunk control and is unable to walk or talk. I never thought that David would be able to enjoy sports activities until last year. Ankeny opened the Miracle League and David is playing baseball and is having the time of his life. They have people who volunteer to be their helpers (called Angels in the Outfield), they help the kids hold the bat and hit the ball and they help the ones in the wheelchairs get to their bases. David gets to interact and participate with children of all ages. The smiles and the laughter and all the adults cheering is priceless."

"Our son Will has participated in Miracle League since its beginning in Ankeny and he has truly enjoyed every season. One of Will's favorite parts of playing is interacting with his "Angels in the Outfield". Whether it be helping him at bat, running around the bases, or rolling the ball back and forth in the outfield, Will has certainly been blessed with some wonderful Angels! It is hard to describe how much these moments mean to the players (and their parents) but it is obvious from the expressions on their faces. We truly believe that it is impossible to leave the Miracle League field on a Saturday morning without a smile on your face and a warm feeling in your heart."

"Proud to live in a community that makes sure all children get to play the All-American game! It was very well designed to serve the needs of the children."

The Miracle Park Project is a $1.7 million public-private partnership between the City of Ankeny and the Ankeny Kiwanis Club.

Fundraising efforts began in 2012 to construct the second Miracle League Field in Iowa but the first with a co-located All-Inclusive Playground to benefit youth with special needs. The Miracle Park Project is located in Hawkeye Park, which is one of Ankeny's most prominent parks. The park is centrally located, with high visibility and convenient parking in close proximity to the park.

Construction began in the Fall of 2012 and the Miracle League Field opened on September 7, 2013, for the first Ankeny Kiwanis Miracle League season. On September 27, 2014, the first phase, the 5 to 12-year-old section, of the All-Inclusive Playground was opened to the public. The restroom and concession facility also opened up in the fall. On May 2, 2015, the final two phases, the 2 to 5-year-old section and the standalone equipment, were completed and made available for public access.